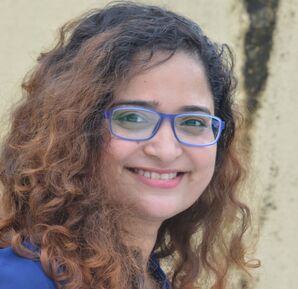 Archana Gore has an impressive qualification with an MCom. in Management to go with her Sangeet Visharad from Gandharva Mahavidyalaya. With over 25yrs of experience in live performances across various theme based programmes, she has shared the stage with stalwarts like Suresh Wadkar, Shridhar Phadke and Sudesh Bhosale.

A multitalented singer with playbacks for Marathi and Hindi movies, albums as well as plays, she is also a visualizer and director for various music videos, short films, commercial ads, montages and lifescapes. 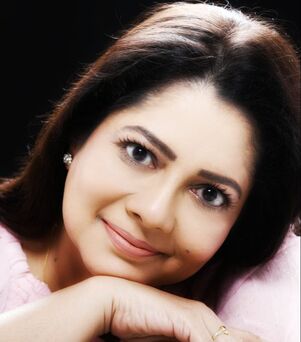 Dhanashree is a recipient of many awards for her singing as well as her music direction. She has also acted as a jury member of Marathi Mirchi Music Awards committee. 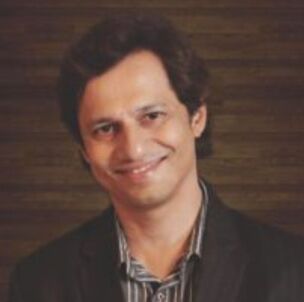 ​Mandar Agashe is an Indian musician, music producer and businessman. He hit stardom in 1998 with his Indi-pop album "Nazar Nazar" which he composed as well as sung. Nazar Nazar was a chart topper in all major TV music channels of India.

Born in a business family, Mandar started as an entrepreneur, whilst being a student of computer engineering, and got into production of herbal cosmetics under the family conglomerate. His first stint with music was as a co-music director with Pandit Hridayanath Mangeshkar and sang his first playback song with Asha Bhosle.

His other notable achievements include launch of the eponymous English album, a blend of modern musical textures and rock and roll.
In 2016, Mandar released a reprise effort with Asha Bhosle in the form of an album called "82", to commemorate the maestro’s age at the time of recording. As a music director and composer, he also featured select ghazal’s of Late Suresh Bhat, who had desired to release his work in Mandar’s style of music. 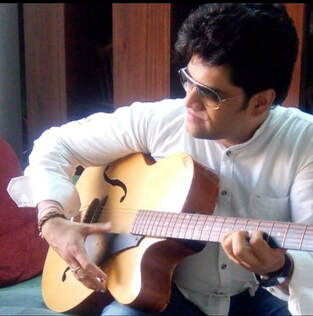 Mandar Apte, a Bachelor of Architecture by qualification who dedicated his life to music as a singer and music director.

Introduced to music very early in his life by his mother Dr. Janhavi Apte, Mandar is also blessed to have received guidance and experience from music maestros like Shrinivas Khale, Yashwant Deo and Ashok Patki.

Mandar was awarded Best Music Director in Zee Gaurav (2005) and has recently won multiple accolades for his compositions in the movie ‘Ti Sadhya Kaay Karte’.

Today he is considered amongst one of the shining stars from the younger generation in Marathi music industry. 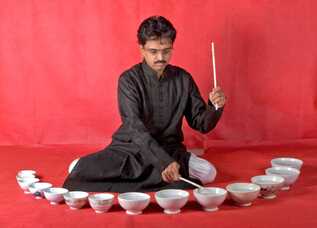 Milind Tulankar is an Indian Jal-tarang player. Born and brought up in a family with musical background, Milind started learning music from a very tender age. He received early guidance from his grand-father Late Pandit Shankar Kanhere who was a famous Jal-tarang player himself. Along with Jal-tarang, Milind is also proficient in playing Santoor, Tabla and Harmonium. Presently he is a disciple of Sitar maestro Ustad Shahid Parwez.
An 'A' graded artist of All India Radio, he has played in numerous concerts all over India and popularised the instrument. Aesthetic development of a raga structure and command of rhythm are highlights of his style. He has also authored a book on Jal-tarang, published by Sanget-Karyalay, Hatharas. 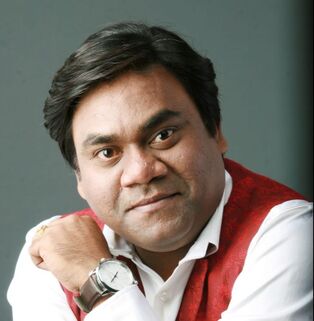 Nandesh Umap is the youngest son in the family of the late legendary singer Lokshahir Vitthal Umap. Growing up, he watched his father’s sacrifice and dedication towards the rich Indian cultural and folk music and to provide the best for his children. He encouraged Nandesh and his siblings to develop their musical gifts from singing to playing music. At an early age of 8 years Nandesh began to perform with his father and has done various stage performances and international shows till today.

Nandesh Umap’s big break came in 1999 when he made his professional debut with a Marathi play called “Ranangan” in which he played a dual role of singer cum narrator, for which he was felicitated by the renowned actor Late Mrs. Dina Pathak. Since then Nandesh has given playback for many movies, dramas, television serials, music albums and advertisement jingles.  He had the privilege of being the first Marathi singer to sing on the platform of Coke Studio 2011 with Lesley Louis and the first singer to sing a Bengali Powada in a recent Bengali Movie ‘Ami Subhash babu bolche ‘directed by Mahesh Manjrekar.  Nandesh has recently completed his First Ever MARATHI SUFI Album “SUFIYARII” which was inaugurated by the King of Sufi “KAILASH KHER”. This album was launched by LM MUSIC COMPANY (Lata Mangeshkar company) Nandesh has composed and sung in this album. For the first time he has also written few songs along with many prominent lyricist. Nandesh has completed his solo Marathi Ghazal album ‘ Ti Yaad Sajanachi ‘  all the ghazals written by his father Late Shri. Loksahir Vitthal Umap, composed and sung by him and released by Universal Music.  Nandesh has received many prestigious awards including the Samrat Ashok Puraskar, Marathi Gaurav Puraskar, Ustad Bismillah Khan Yuva Puraskar of Sangeet Natak Akademi for the year 2012 for his contributions to folk music in Maharashtra. He also holds the  World Amazing Record  of ‘Longest musical drama with heaviest accessories’ for his performance in Jambhul Akhyan where he plays the role of Sutradhar as well as the main character Draupadi. One thing that does separate him from others is that while some singers get too jazzy in their songs, Nandesh leaves much to the listener's imagination.

Nikhil is an experienced singer and composer who loves to produce musicals for films, theatricals, albums, television and advertisements.

He is known for his singing skills  in Marathi, Hindi, Prakrit and Sanskrit languages.

Music is what Nikhil knows, does, and loves. He believes that mixing melodies, beats, rhythms and tempos always open the doors for something new and unique. 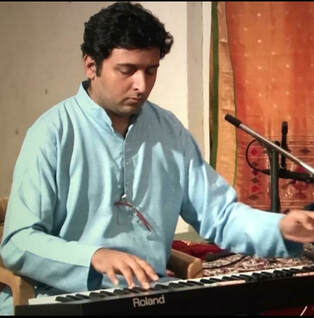 Ruturaj is an Electronics Engineer graduated from VIT College Pune in 2006.

He has a passion for music and plays Keyboard and harmonium.

He has accompanied various singers on keyboard and harmonium in different programs.

​He is also a composer with over 25 of his songs performed by   established and upcoming singers. 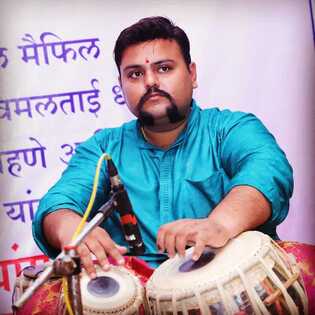 Sanket Joshi is an advocate by profession and a musician by heart.

A trained Tabla player, he started his early training under the able guidance of Shri. Sunil Sharma Guruji and is currently mentored by renowned Tabla Maestro Pt. Ramdasji Palsule.

Sanket has composed various jingles, ghazals and bhajans.
​
He has won multiple awards for his Tabla performances and music direction and currently has his own Youtube channel named ‘SanketJoshi’ 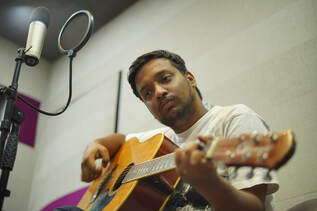 Shreyas Joshi is an Indian Music Composer and a Music Therapist. He developed interest in music from his young days, listening to regional  songs on radio and cassette player. Despite completing Sound Engineering after graduation,  he was more inclined towards music than technical part of it.

After working as Keyboard player in live shows, he found interest in music composing , he decided to choose it as his career. He has also worked with Simplography band as a singer and percussion player. He also started working as a Music Arranger and Producer after completing his education in sound engineering.

Shreyas has a collection of more than 100 songs under his own music direction. He believes that he finds inspiration in Indian Classical, Semi-Classical, Western Classical and other varied music. He has worked as a Poet for 9X Zakkas Channel and he is a certified Music Therapist also .

Somesh Narvekar is an accomplished composer as well as a performing artist. His music videos ‘Tya Saanj Kinarayapahi’, ‘Chahul’, ‘Tya Saanj Kinarayapahi’, ‘Tujyasave’, ‘Man Vede Pakhru’, ‘Mazya Manatale’, ‘Dev Majha’ are currently a big hit on YouTube.  He has also directed music for the albums ‘Maunat Bolte Raat’, ‘Toch Chehra Tuja’, ‘Mazya Savlya Vitthala’.  He is known amongst the music fraternity for his unique style of combining programming with live music. His father, Bhagwant Narvekar, was a musician and a key motivation for Somesh who spent his early childhood in an environment full of music.

Somesh believes in maintaining the spirit of the lyrics and melody of his compositions without diluting the essence of the song, something that’s rare on social platforms. His secret to success is to continuously experiment on compositions  whilst working hard on arrangement of his songs, good recording and selection of good musicians.
G-DH3GTPWDMJ